"Research presented at the ASM Microbe research meeting demonstrates a new way bacteria can cause dramatic morphological changes in human cells," says Medical News Today. "Specifically, the researchers discovered that a common bacterial contaminant of contact lenses and cases can cause the formation of large bubble-like membrane structures on human ocular cells, which can contribute to contact lens wear complications and inflammation." Read more.
Posted by Joseph Conlin at 7:32 AM No comments:

Temporary Blindness from Smartphone Use

"In Thursday's New England Journal of Medicine, doctors detailed the cases of the two women, ages 22 and 40, who experienced 'transient smartphone blindness' for months," notes an Associated Press post. "The women complained of recurring episodes of temporary vision loss for up to 15 minutes. They were subjected to variety of medical exams, MRI scans and heart tests. Yet doctors couldn't find anything wrong with them to explain the problem." Read more.

Posted by Joseph Conlin at 7:20 AM No comments:

"A new study estimates that 9.6 million adults in the United States are highly myopic, or severely nearsighted," according to a post on Medical News Today. "Of those, nearly 820,000 have a degenerative form of the disease and more than 41,000 suffer a complication called myopic choroidal neovascularization that could cause long-term vision loss, with women at higher risk. The findings are being published online in Ophthalmology, the journal of the American Academy of Ophthalmology. This is the first large-scale study ever done to calculate the real-world prevalence of myopic choroidal neovascularization in the United States." Read more.
Posted by Joseph Conlin at 7:09 AM No comments:

People with type 2 diabetes who intensively controlled their blood sugar level during the landmark Action to Control Cardiovascular Risk in Diabetes (ACCORD) Trial Eye Study were found to have cut their risk of diabetic retinopathy in half in a follow-up analysis conducted four years after stopping intensive therapy. Investigators who led the ACCORD Follow-on Eye Study (ACCORDION) announced the results today in New Orleans at the American Diabetes Association annual meeting. The study was supported by the National Institutes of Health’s National Eye Institute (NEI).
Posted by Joseph Conlin at 11:10 AM No comments:

"Researchers from Harvard University have developed a new type of flat lens that could replace more cumbersome curved glass optics currently used in a wide range of imaging appliances," reports the Christain Science Monitor. "'This technology is potentially revolutionary because it works in the visible spectrum, which means it has the capacity to replace lenses in all kinds of devices, from microscopes to cameras, to displays and cell phones,' Harvard professor and researcher Federico Capasso said in a university release. Professor Capasso was also the senior author of a paper on the new technology, published in the journal Science. Capasso's planar lens is capable of processing images of objects smaller than even the best current microscopes, using a titanium dioxide-based array of nanostructures. That oxide is already used in applications ranging from skincare to white pigmentation for paints, foods, and more, and was chosen by the researchers due to its ubiquity and capacity to process light." Read more.
Posted by Joseph Conlin at 3:44 PM No comments:

Google's Contact Lenses May Not Live Up to Hype, According to a Report

"The signature product from Alphabet-owned life sciences company, Verily, is still a long way from hitting the real world," according to Business Insider. "The glucose-sensing smart contact lens that Google first announced in 2014 is still just "slideware" that doesn't exist outside of PowerPoint presentations, according to a former Verily manager who spoke to Stat's Charles Piller as part of a critical look at the company's current endeavors. The contact lens project aims to provide an alternative for people with diabetes who currently have to prick their fingers to test their blood glucose levels. Instead, the lens could monitor the glucose levels in their tears. But the Stat report questions whether the lens will ever be scientifically feasible." Read more.
Posted by Joseph Conlin at 3:35 PM No comments:

Yesterday was "National Eyewear Day, which is definitely just a made-up holiday. But it gives us an excuse to imagine what the biggest names in sports would look like if they wore glasses. Basically, they’d all look about five years older." That's the opening of a picture essay in Sports Illustrated. Read more.
Posted by Joseph Conlin at 7:53 AM 2 comments:

Science Daily reports: "Skin, eye and hair pigmentation requires a delicate balance of acidity within the cellular compartments where melanin is made -- that balance is partly regulated, scientists now know, by a protein called TPC2." Read more.
Posted by Joseph Conlin at 7:44 AM No comments:

Cosplayer Risks Vision for Sake of the Game

"The best cosplayers sacrifice a lot of time, money and comfort to pursue what is regarded as an intense art form," according to Houston Press. "'Johnny Hybrid,' the stage name of one half of the cosplay duo known as Hybrid Cosplay, damaged one eye this weekend while desperately trying to remove his special contact lenses. He was preparing to go to Space City Con this past weekend and not only missed it, but will likely have to miss some other scheduled conventions. A doctor at an urgent care center told him he may lose his eye." Read more.
Posted by Joseph Conlin at 7:39 AM No comments:

"Researchers studying babies with a Zika virus-related birth defect say they have found previously unreported eye problems possibly linked to the virus that could result in severe visual impairment," reports Science Daily. "In three Brazilian infants with microcephaly, the researchers observed retinal lesions, hemorrhaging and abnormal blood vessel development not noted before in relation to the virus. The findings are being published online today in Ophthalmology, journal of the American Academy of Ophthalmology." Read more.
Posted by Joseph Conlin at 7:31 AM No comments: 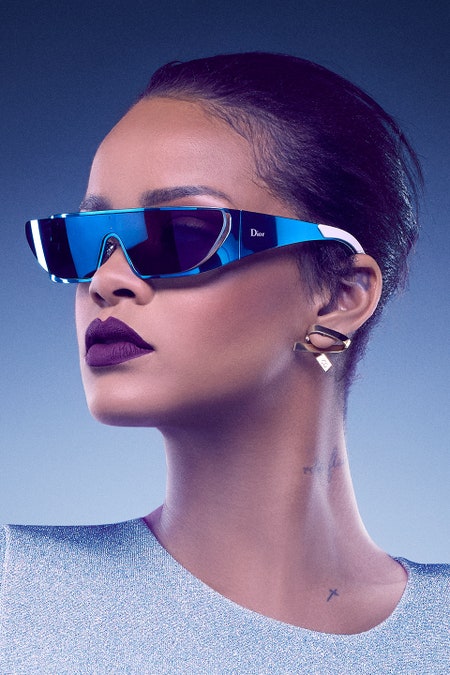 "As the world gears up for the third installment of Rihanna’s must-have Puma creepers, news arrived of another RiRi collaboration sure to send fashion people into a tizzy. 'After embodying the Dior woman in the Secret Garden IV campaign, the House of Dior and Rihanna are writing a new page in their shared story: the star has designed a pair of sunglasses with pure lines and futuristic accents in a range of metalized colors. Named simply "Rihanna" they will arrive in stores in June,' a release from Dior reads." So goes the Vanity Fair writeup. "The glasses look exactly as they’re described: extremely futuristic, while also giving some strong 80s vibes. Rihanna told Dior that La Forge from Star Trek was her inspiration for the glasses. 'I’ve always been obsessed with his eyewear, and when I got to Dior and saw all the materials I could play with, it all just came together.'" Read more.